Sometimes, people just really get me down.

Fair use cited so on and so forth.

Representative Rashida Tlaib's re-election campaign has started selling T-shirts based on her most widely-known phrase: "Impeach the MF." The new merchandise launched following the announcement of a formal impeachment inquiry into President Trump earlier this week.


The Democratic congresswoman from Michigan went viral earlier this year for passionately calling for Mr. Trump's impeachment. "We're going to go in and impeach the motherf***er," she said, just hours after being sworn into office.

"Lean in with me to hold this lawless President accountable. Together, we will fight back and protect our democracy," Tlaib tweeted Thursday. 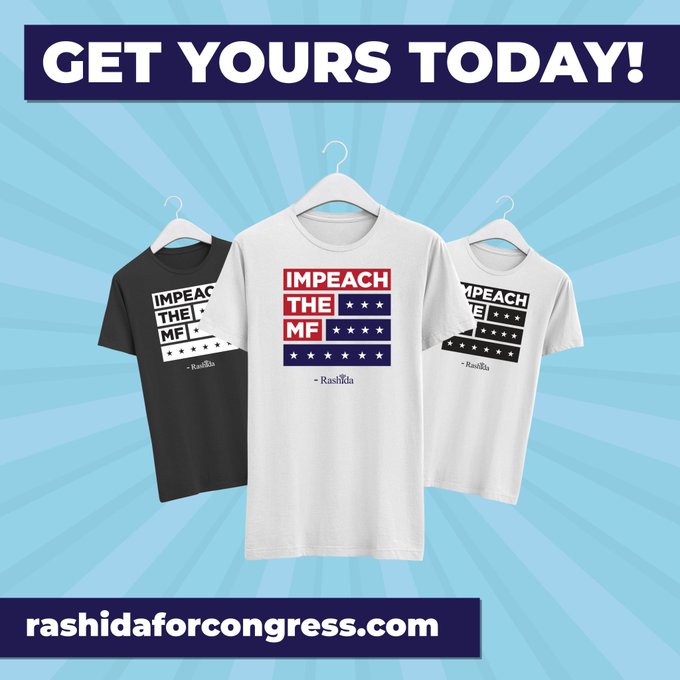 @RashidaTlaib
Lean in with me to hold this lawless President accountable. Together, we will fight back and protect our democracy.

Our country depends on it!

...and yes you can even wear what you feel https://secure.actblue.com/donate/impeachmftshirts …

View image on Twitter
3,273
3:02 PM - Sep 26, 2019
Twitter Ads info and privacy
8,847 people are talking about this
Some social media users accused Tlaib of making light of the impeachment inquiry. She defended herself on Friday, tweeting, "Impeachment is serious — I know this. But it is a mistake to try to equate T-shirts with the destruction of our democracy or try to paint those who've risked out safety calling for it, as not taking it seriously."

"If there is anyone who takes impeachment seriously it is myself & the people I fight for every day," she continued. "Whether or not you agree with the expression, the T-shirts are to bring levity to my supporters."

Speaker Nancy Pelosi announced this week that the House launched a formal impeachment inquiry into Mr. Trump, who faces allegations that he pressured the Ukrainian President Volodymyr Zelenksy to investigate former Vice President Joe Biden and his son, Hunter.

Too bad we can't impeach the ENTIRE demon-O-craptic party and boot out the whole bunch in one fell swoop. Thus saving the Republic.

She’s an embarrassment to the Democratic Party as well as the entire human race!

How can regular conservatives and/or Christians teach our kids and grands not to use this word when an elected representative is encouraging them to buy these shirts? Will the kids be allowed to wear them to school?

This really makes me furious!
M

Actually, I love the t-shirt. I hope they sell a few million and I hope everyone who supports this impeachment process wears theirs every single day. To the supermarket, to the food pantry, and to the park.

I actually can't think of anything better for America than for all of the enemies of freedom to come out and openly declare themselves and wear their colors so we can identify them thusly.

This too shall pass.

Too bad someone can't confiscate the whole lot and add her name to the bottom.

Freeholder said:
Too bad someone can't confiscate the whole lot and add her name to the bottom.

It already is! Check out the bottom of the shirt!

My opinion, this is slander! I think Trump should sue her a— clear back to her foreign roots!

This too shall pass.

Blacknarwhal said:
It already is! Check out the bottom of the shirt!

LOL! I hadn't noticed that!

And yes, the MF could stand for Muslim Females.

I'm not sure this qualifies as slander. It's foul language, crude, in poor taste, nasty...but it's an opinion. I think, in order to be legal slander, it has to be false information, like saying so and so molested certain children, or stole cars, or something like that.